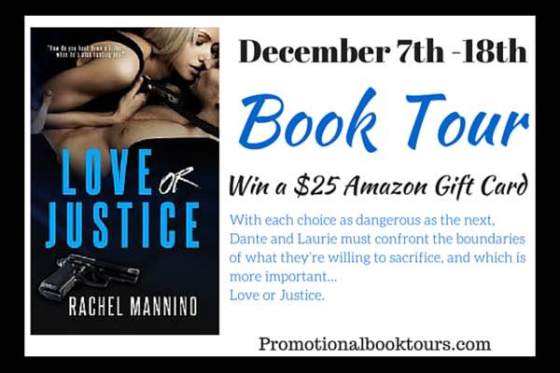 Try to describe your book in one sentence.

It’s an action packed romantic thriller with lots of twists, turns, and a romance that’s worth fighting for.

Where would you live if you could live anywhere in the world?

Monrovia, CA. My husband and I took a trip out there to visit friends and we loved it. Nice little town. Walk up into the mountains, drive to the sea. No humidity and perfect weather all the time. Pasadena would also be up there on my list.

State a random fact about yourself that would surprise your readers.

I lived in a castle. My college rents a castle in the Netherlands for our study abroad program. So, I went to live there for 3 months to travel Europe. I highly recommend living in a castle at some point in your life. Bring a sweater – it’s drafty.

Who are your cheerleaders?

My husband, who is also an author, is my biggest cheerleader. I also have a lot of friends and alumni from my high school who are just so thrilled to see that I’ve published a novel, and they’ve been super supportive.

What do you love about writing?

Getting sucked into the world I create and falling in love with my characters. Every time I go back to edit, it’s like going home again.

What’s the hardest part of writing a book?

The pre-editing stage. There is no “pre” about it. It’s the toughest part and it will drive an author crazy. You have to go through and see how many times you’ve written the word “that” and get rid of half of them. Then you move onto some other word. It’s painstaking, tough, and zaps any and all creative energy.

Did you know the title before you started writing?

Actually, I had to change the title before publication. My novel was originally called Apprehension. There was another title published through Limitless that was similar. So, we ended up changing it to Love or Justice.

Did you do any research before start or during of the writing of the books?

Which genres do you prefer to read?

Where can your fans find you ?

After writing the novel, my husband and I actually got to go to Hawaii. So I was able to see the places I wrote about. It was wonderful. We loved Hawaii very much. Glad I picked it for the setting.

How many more books can we expect in this series?

There will be four more books in the Protect and Serve series. They will be focused on the love stories of federal law enforcement officers. Next up, I’ll have a very hardworking FBI agent and the woman he accidentally kidnaps!

Love or Justice by Rachel Mannino

After stumbling into a deadly kidnapping, Laurie’s life is in grave danger, and it falls to US Marshal Dante Stark to keep her safe until she testifies against Kaimi Quamboa—assuming he can be captured.

But when he has to comfort her through constant nightmares, he finds it nearly impossible to fight his attraction to the beautiful, strong young woman he is sworn to protect. Laurie feels it too, but aware she’s in a high-stress situation and that when the danger is past she’ll never see Dante again, she tries to ignore his easygoing smile and the security he offers.

Laurie and Dante are forced to flee again…

When Kaimi’s men descend on their hideaway, they escape to a second safe house, only to be tracked down there as well. Dante now knows there’s a mole inside the US Marshal Service, and the only thing left to do is disappear.

Kaimi will never stop looking for Laurie, and if he’s caught, showing up to testify could be the last thing she ever does.

With each choice as dangerous as the next, Dante and Laurie must confront the boundaries of what they’re willing to sacrifice, and which is more important…

Rachel Mannino is a passionate writer who creates characters and settings that allow readers to explore power dynamics in relationships, the empowerment of women, and the ethical and moral dilemmas love can create in our lives. Rachel also uses her writing skills to raise thousands of dollars for entities that enrich our lives and create community change around the world.  She has worked for the Peace Corps; the Humanities Council of Washington, DC; Woolly Mammoth Theatre Company; and the Mayor’s Office of Arts, Tourism and Special Events in Boston, MA. Her first novel, Love or Justice, was published by Limitless Press in November 2016. Her second novel, Fractal, will be published by eTreasures publishing in the spring of 2016. Rachel has a BA in theatre studies and writing, literature, and publishing from Emerson College, and she has used it every day since graduation.  She lives with her husband, author Christopher Mannino (http://www.christophermannino.com/), and their adorable dog and cat in College Park, Maryland.

One thought on “Love or Justice by Rachel Mannino #authorInterview @RachelMannino02”